Creative Endeavors: A Bit of Bread 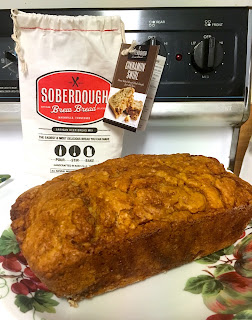 After quite the blogging hiatus here, I'm back with lots to share!  Last year was filled with all sorts of unscheduled fun like multiple bouts of the flu and a couple family medical crises (thankfully all resolved in a good way.)  And then there's that textbook that has been taking up all of my spare writing time ... but that's well in hand (finally) and it's time to get back into the blogging habit for 2018.  I've already done two quilling workshops in the last 10 days, and I'm excited to let you in on all that happened!

I couldn't resist blogging about this loaf of bread.  I know, it isn't quilling or jewelry, but I consider bread to be a highly creative (and unpredictable) endeavor, so here it is.

I spotted this bread mix in a store.  "Soberdough" which it certainly isn't.  I normally stay well away from making real bread - I can't get it to rise; I think I might be a witch.  But anyway, this one said, "Just Add Beer" and I couldn't resist.  Since it was cinnamon swirl bread I used a bottle of Angry Orchard Cinnful Apple Hard Cider instead of beer.  Mixed it up as directed.  It said "pour" into bread pan but mine sort of "plopped."

Still, it made the house smell great while it was baking.  I pulled it out, let it cool, and lo and behold, a loaf of bread.  It sort of has a consistency somewhere in the middle of the muffin-bread-cake ternary diagram.  Flavor is not bad at all.  Had some for tea today, and it was very nice.